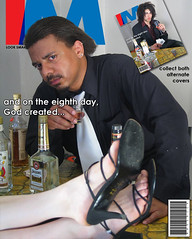 beststephi pointed this article out to me earlier today. To synopsize, former Education Secretary William Bennett has been criticized by the Democrats in Congress for making what they consider a racist remark, and they have asked that Republicans do the same. Steph wanted to know my take on it. And I want to know yours.

So what did he say exactly?

"If you wanted to reduce crime, you could -- if that were your sole purpose -- you could abort every black baby in this country and your crime rate would go down.

"That would be an impossibly ridiculous and morally reprehensible thing to do, but your crime rate would go down."

So am I outraged?

No, I'm not actually. The thing is, I get his point. He wasn't saying to go out and kill black babies. He was saying just the opposite. He's a conservative. He probably doesn't even believe in abortion. He was specifically refuting the idea as ridiculous. He was using hyperbole. I can't fault that. I do it all the time.

My biggest problem here, is that by claiming racism anytime anyone says something of an opposing point of view that happens to include a reference to blacks, negros, african americans, niggers, jiggaboos, porchmonkeys or coons, you actually make light of actual racism. My being traded to the Chinese with Wu-Tang clan during the 2003 racial draft not withstanding, I've been a negro most of my life. I've dealt with plenty of racism. I've been followed through department stores by security guards. I've been pulled over on DWB charges. I've been called racial slurs by The Man for fucking his women. I don't need to invent incidents to add to it.

Really, I'm sure if you just give it another 24 hours someone in politics will commit another legitimate transgression against the negroes for us to all be in outrage against.

Well, that is until the white man and the black man unite under the common ground of aborting spic babies to cut down on immigration. For only when the black man and the white man are united under the control of the chinaman to annihilate the oppresive mexicans will anyone ever be finally able to deal with the jews. Or you know, we could all just forget about all of this and have a beer.

"Can't we all just get along(and drunk)?"
Collapse