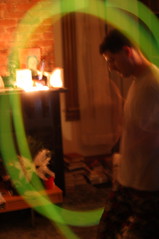 Meron spinning "fire"
at Jammy Jam '04
Originally uploaded by
chrismaverick.
so on the way to my weekly poker game,

beststephi and I were listening to conservative radio talk show host Michael Savage and he was talking about the popularity of Jews in comedy. He specifically cited Jerry Lewis and Woody Allen and later Jerry Seinfeld stating that Jews become popular in comedy by being self-deprecating. His theory being that it is the base anti-semitism of the the population at large that causes people to laugh when a Jew makes fun of himself.

He went on to point out that all portrayals of Jews in the media are comedic and that the real tragedy was that the media never addresses the "Warrior Jew." That is to say the strong powerful jew that kicks butt and takes names while chewing bubblegum. You know, the Jew that history is full of.

Part of me wants to say that he's full of shit. The reason Lewis, Allen and Seinfeld were popular is because they were good comedians, and one of the great testmaents to successful comedy is the ability to be self-deprecating. Negro humor tends to be far far far more racially self-deprecating than Jewish humor ("Black people are more racist than white people, because we hate niggas too"). Maybe at essence it is hate that makes people laugh at these jokes, but I don't think it is specific to the Jews.

That said, for every George Lopez, Chris Rock and Rodney Dangerfield there's an Antonio Banderas, Dwayne "the Rock" Johnson or a Keanu Reeves. But for the life of me I can't actually think of any popular warrior jews in the media. Are there any? Or do people really think that the jew is only seen as the punchline to the great racial joke in Hollywood, even more so than any other race?

I'm obviously especially interested in what my jewish friends think here, but I'd like to know what other people think as well.

EDIT: The picture of

ludimagist, Warrior Jew, though uploaded to Flickr by me, was originally taken by

anukul. Credit where credit is due.
Collapse