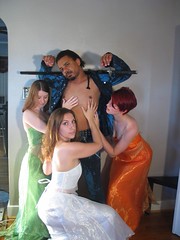 Chris Maverick, the Beast Master
Originally uploaded by chrismaverick.
So did you ever see that episode of Friends, "The One with Frank Jr." (I just love the way Friends episodes are named). Where the Friends talk about having their "lists." The concept being that in a relationship, you are allowed to make a list of five people whom you are allowed to cheat on the other person with, if the opportunity ever arises. If you didn't see it on Friends, I'm sure the same basic plot has probably happened on about a dozen other sitcoms.

So anyway, a couple years ago,

beststephi decided to make her own list. Being the lovable bundle of geekiness she is, she went so far as to rank her top ten in a little Excel spreadsheet. She then started pressuring me to do the same. I told her that I had no such list. I wasn't capable of it. She pressured me until I agreed to do it, and then I quickly rattled off a list of women she knew. Two of whom were in the room at the time, if I remember correctly. Amazingly, I still have a relationship.

But I want to know what other people think. Has anyone, male or female, ever seriously done this? And if you haven't would you be upset if your husband/wife came home from work one day and said "Honey, you're not gonna believe this, but I met Halle Berry/Johnny Depp on a lunch break today, and we got drunk, hit it off and had crazy sex in the back of their limo. I know it was wrong, but when would I ever get that chance again?" Seriously, would that bother you, or would you be ok with it? (insert whichever celeb your theoretical SO would want to have sex with). Would you understand or would you dump them. If a celeb you thought was superhot and came onto you, would you go for it and hope/expect your SO to understand? Why or why not?

Finally, even if you would never actually go through with it, or even if you would, what five celebrities would you put on such a list, and why? Ladies, I'll allow you six, as long as one of them is me.

Cruise ship under fire from modern pirates
Arrrrrrrr!!!!
So I am less than 34 hours from starting my new job at ACS, and suddenly I am dreading it. I'm not looking forward to it at all, in fact. Not because I don't think I can do it. Not because I don't think it's a good job. Not because of any fault of the job itself at all in fact. No, I am dreading it, because I am beginning to realize that maybe I missed out on one of my child hood dreams. I don't want to work in an office anymore. I want to do what every kid wants to do. I want to be a pirate!

jakegarrett. Not the kind that has anal sex with other men. No, I want to be a real honest to goodness pirate. Raping and pillaging on the high seas! See, I thought like so many other adults that the days of piracy were over. A vestige of times gone by. But apparently that is not true. It turns out that piracy can still be a highly lucrative career. Why the hell didn't anyone tell me that you could still go out and be a pirate in the 21st century? Dammit, I never would have bothered with the whole college thing, if I'd known that. Fuck! Ok, granted, these particular pirates were lame and were scared off by a sound effect, but that doesn't mean that the idea isn't sound. I'm ready, I have the sword, all I need is a parot and I'll be all ready to take to the high seas. Who's with me.

max1975? My hypos is getting the better of me. What say you?

nemesisn4sa, I'd totally be willing to be a ninja instead. In fact, I'd prefer it. If you can find me a lucrative business opportunity doing that, I'm totally in. Until then, Arrrr!
Collapse