Action Comics #1
Art by Joe Shuster.
So before I get into this, you ever notice that on the cover of Action Comics #1, the people are actually running from Superman? I mean, Superman is basically trashing some poor guys car. For no good reason. There's no sueprvillain. He's not catching it. Superman just decided to pick up some dude's ride and ram it into the pavement. Note the look of terror on the guy's face in the foreground. So that's the answer, you see. Infinite Crisis isn't blazing any new ground. Golden Age Superman was always evil, dammit!

So anyway, I was reading the news this morning and I came across an article about historic comics. I think they made some really good points. Reading through it brought to mind my Canonical List of Comics from three years ago. So I went back and reread the list. Three years later, and I'm still pretty happy with the choices, and even my omissions. Its funny, but three years later, and I find it even easier justify the omission of Sandman. I almost wish I had left out Preacher and gone with Animal Man. But at the time I was really trying to find as many good non-superhero books as possible. Anyway, anyone who wasn't around at the time, or anyone who was and feels like revisiting it, I'd love to hear what you think about it now.

Anyway, to do something a little different, I wanted to make a new list approaching it a little different. So I'm going to try and come up with 10 comics I think you should be reading now. This is going to be a little different than the old list. As opposed to canonical significance, I'm aiming for more of "what Mav thinks are fun reads." Things that are being published today, so unfortunately, I for once can't recommend Watchmen. That said, you should really go read it anyway. So in no particular order:

Wow... I can't even get to ten. That really was my intent. I wanted more DC comics. In fact I really wanted to recommend Teen Titans, but in the last 3 issues, we've had two stories with art by Rob Liefeld, that pretty much rendered them unreadable, and the last one was an Infinite Crisis tie-in that not only was hard to read, but it had Jason Todd in it, who's return I totally oppose. I also wanted to put in a good non-standard superhero kinda book. But I can't think of any that have been really good must reads lately. The closest is Runaways, which isn't really a superhero book, even though its a Marvel book.

So anyway, I guess what I'm saying is, give me recommendations for the final 3. 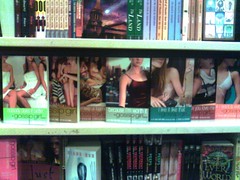 Books for Girls
Originally uploaded by chrismaverick.
So I stopped in Barnes & Noble on the way back to my office from lunch. I was just looking around but what happened to catch my eyes was a display in the young adults section for a group of books called The Gossip Girl series.

I was instantly inrigued. Not by any of the content or anything. Because, I didn't actually bother to pick one up and look through it or anything like that. Nah, I was intrigued by the covers. Every book in the series seems to feature a close-up of some hot teen girl (usually a group of 2-5 of them) with their head chopped off. Basically, they're all boob shots.

A while back I expressed the desire to start a lucrative career writing harlequin romances and make tens if not twenties of dollars. The biggest stumbling block, other than my own laziness, was that I don't actually care about romance novels. So I never really got inspired to do it. But I actually did read a teen novel or two back when I was a teen. If I remember correctly, they were high on stories about sex and parties and drinking and drugs. I guess there might have been some morality mixed in, but not really in the ones that I liked well enough to remember at all. And hey, I'm all about the sex and partying. So maybe that's my new career right there.

But does anyone actually read that stuff. Anyone here have a teen daughter (or sister or cousin or whatever)? Do they like this kinda story. Do you remember being a teen yourself? Did you read this stuff? Does the teenaged girl actually get attracted to a book because there's a lot of boobie on the cover? Hell, is it enough to make a teen boy read the book?

And what's in there? I mean, the covers imply lipstick lesbian experimentation at slumber parties, in the back of limos and in saunas. It's more the kinda thing I think I'd be into than a 14 year old girl. Or has 8th grade just REALLY changed since I was in it?
Collapse