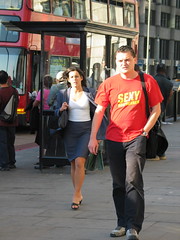 Sexy Northerner
Originally uploaded by chrismaverick.
So there was a story in the news this morning about a group of 23 Fox Chapel high school girls who "girlcotted" Abercrombie and Fitch to get them to stop telling T-shirts they found offensive. The T-shirt in particular that got them all riled up was one that had the words "Who needs brains when you've got these" across the chest.

The girls went so far as to suggest alternate T-shirt titles for the A&F to use. T-shirts that celebrated intelligence and academic achievement. Among the suggestions:

And you know what the really sad part is? A&F has actually agreed. They have decided to pull "offensive" T-shirts off the racks.

Now do you people see why I hate freedom?

Look, at the risk of sounding sexist, let me point something out: "Tits are funnier than brains!" They just are. Deal with it. Actually I like the sound of that. Maybe I'll put it on a T-shirt. If I did, would anyone buy one?

These girls won't. They make a good point. One said, ""The money's coming out of our wallets. We're putting our money down for their products. So, they've got to make it better." Fine, so buy T-shirts you like. Why can't the rest of us buy T-shirts we like?

The thing is, I'm kind of a T-shirt enthusiast. I love funny T-shirts. I wear them to parties. I've even made it a part of my wrestling gimmick. I realize that not everyone shares my love of stupid offensive T-shirts.

beststephi for instance doesn't care for them. You know how she deals with it? She doesn't fucking buy them!

I'm even ok with schools banning offensive T-shirts from their dress codes. You'll note that I don't wear my offensive T-shirts to work. I'm fine with that. But will someone please explain to me why people think its ok to push their standards of decency on me? Its like the people who want the FCC to regulate cable, the internet and satellite TV and radio. Let me make it abundantly clear, I'm a fucking grown ass man! I like certain aspects of low-brow humor. I make good money and I choose to spend it on said humor. NOW LEAVE ME THE FUCK ALONE! Is that so hard?

And on top of that, the T-shirt slogans they selected are lame. "You're just jealous that I have a 4.0?" Of all the pompous bullshit. Maybe they're just jealous that other girls have nicer boobs. Who ever made the decision that boobs are more important than brains anyway? Why not just wear a shirt that says "I'm a nerd, please beat me up."

Now that I think about it, that's an awesome slogan to put on a T-shirt. If I make one, will anyone buy it?

In closing, I'd just like to point out a couple of things. First, I don't actually know that the british gentleman in the picture above is wearing an A&F shirt. I just really like that picture and it seemed to be a good fit for this rant. Second, damn, the girl to his left has a nice rack.
Collapse