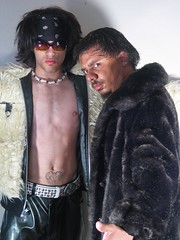 So IWC has this annual vote for the such and such of the year awards. Its a chance for the internet fans to go and provide feedback and blah blah blah. Really, its actually kinda irrelevant. But it is an election. And so, in keeping with modern times I've decided to do what all great politicians do with elections. I want to fix it.

See, here's the thing. Last year Shiima won "Newcomer/Rookie of the Year." Only he didn't actually win. He tied. A fact that he and I spent all of this year ignoring as we talked about how great a victory it was. Well, now what I would like is for Shiima to become the first ever two time rookie of the year.

And I need your help. See, I've already voted for Shiima. As has he, I think. And

beststephi. That's not going to be enough. So here's where you come in, mighty reader. Just take a second to vote for Shiima. Its not even very hard. You can do it simply by sending email to the voting address. And to it make it even easier, all you have to do is click this link. It should set up a mail message for you. All you have to do is send it.

And hey, if you're feeling up to it, feel free to add a vote for me for non-wrestler of the year. That one's up to you. It'd be neat, but I don't care as much.

Now if only I could somehow get myself to be president this way.
Collapse