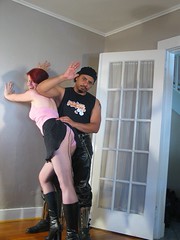 I've certainly posted before on topics that involve both of those things, but oddly, I don't think I've ever asked people where they fall in their beliefs along those issues.

I have a lot of wacky beliefs. Tons of them. Let's just say that I'm a few fries short of a happy meal, ok? But I never try to force any of my beliefs, sexual or otherwise on other people. I like sex, but I've never raped anyone. I worship Jay-Z but I've never kidnapped anyone and tried to brainwash them into agreeing. I think Monty Python fucking sucks big donkey dick. But I don't protest their movies. I just keep to myself and look down my nose and silently disdain all of you who don't agree with me. Why are the anti-sex people always so gung ho about making a big stink?

I think they just don't get laid enough.

In other news, I think I'm well past overusing the photos from the old shoots of me, Steph,

princessdiablo. I need to do more photoshoots.

sexyhockihoochi, you're already on deck, we should do it soon, before you're gone back to school (and you better not leave without giving back my DVDs! :-P ). But who else wants to do one?

marmal8, you had been interested at one point. I might have time on Saturday before getting ready for NYE parties. So Nicki, Katherine or anyone else who wants to provide me with sexiness for artwork and photoblogs, let me know.
Collapse