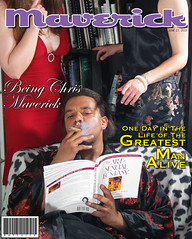 Being Chris Maverick
Originally uploaded by chrismaverick.
Note: Long time readers may find this image familiar. No, I didn't actually use this image before. I used the image that I made this image from in this post. That was just a throwaway though. This time it seems appropriate.

So I was watching the Inside the Actor's Sudio episode with Dave Chappelle (which if you haven't seen it, I must highly recommend it. I may have to get it downloaded off my TiVo and put onto a DVD or something). Anyway, during the commercials (even though we can fast forward through commercials, sometimes

beststephi and I are too lazy to do so) there was an ad for the upcoming reality show called Blow Out 3.

Now I'm not the type to bash reality shows. They are what they are (sorry,

max1975). I think they have their place in the world. I even quite enjoy watching some of them. But Blow Out 3? How in the name of Jigga does this exist? Someone somewhere not only decided that blow drying hair in a salon was interesting to warrant a television show, but they decided that said concept was exciting enough to justify not one, not two but three fucking seasons?!?!

I've said several times that I'd give anything to not have to work and be able to write full time. What kind of writing varies. I always wanted to be a novelist. It's what I primarilly studied at CMU. Lately however, I've been totally into this blogging thing. I have no idea how someone makes money blogging, but the second I figure it out, I'm in there. But now I'm thinking, WHY THE FUCK DON'T I HAVE A REALITY SHOW?

brotherless_one and I actually invented the reality show back in 1990. I worked for the local public access television station, a gig I got as part of a class called "Telecommunications" that I took in high school. We had this great idea for a TV show that would feature people hanging out in my basement. It wasn't a talk show or comedy show like Wayne's World. No, it was just the real life story of shit that happens in my basemenet. Mostly a bunch of teenagers hanging out and talking about stupid shit. It would have been the best thing ever. Well, except that the idea fucking sucked and so it never went anywhere.

What an idiot I was. What I failed to realize at the time was that I'm a damn fascinating person. I could have struck gold there. I won't make that mistake again.

And you can be a part of it! I need lovable supporting characters. And nasty ones too. What's a reality show without a snide bitchy villain girl or an amusing gay guy (you don't have to really be bitchy or gay, I can probably just create the impression later in the editting room)? And hey, if you don't want to be a part of the onscreen talent, no problem, I lead a busy life, not bound by a single studio or a Panamanian island, so I'm sure there'll always be room for an additional gaffer or grip. And catering, I defintely need catering. Being an huge sucessful reality star can make you very hungry.

So who wants to help? Anybody have any ideas for exciting theme episodes? Or maybe some kooky physical challenges the cast can partake in so as to win a tarp to hang over the shelter or whatever?

Also, I'll be needing seed money. So hey, throw me a couple bucks and I can hook you up with a producer credit.

Sure, this all sounds really silly. But can anyone honestly tell me that I'm not more interesting than a HOVAdamn hair salon?

Emma Watson
That ain't butter beer...
So, when

nowishere both just thought it was kinda blah. I so totally don't understand. It's Emma Watson1, TV's2 Hermione Granger, drinking a Corona.

So I ask you noble reader, is this not the very definition of humor? Why or why not?


1: For the record, I'd like to point out that I used decorum and refrained from using any adjectives to describe the physical appearance of Ms. Watson and my opinions or preferences thereof. Suffice it to say, I think its quite reasonable to announce that Ms, Watson will TMA in 45 days in her native land.
2: Yes I realize she is actually film's Hermione Granger, but at least one of the Harry Potter films has been on TV, and I think TV's Hermione just has this lovely ring to it. Kinda like TV's Frank.
Collapse