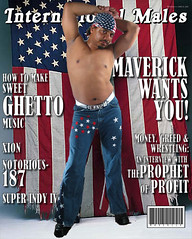 American Mav
Originally uploaded by chrismaverick.
I don't really want to get the interview meme started up again, but I was just thinking that I hadn't really posted anything in over a week, and I was also thinking that there are a bunch of people reading this who I don't know, or haven't talked to before (as well as anyone who's reading it since I started cross posting to myspace).

So today, in lieu of an actual content, I'm going to steal

kingdomjames's gimmick for a moment. Ask me anything!

Ask whatever you want. I'll answer whatever. Maybe even truthfully. And hey, maybe it'll give me an idea of something else to rant on.

Now see, that's what I get for saying I don't really have anything to write about...

So after work, I picked

beststephi up and took her to get her van out of the shop. I was following her home (she was 2 cars in front of me) when I had to stop for a pedestrian crossing the street. I actually really hate when they do that. There was no stop sign or light, but they just dart out. Being the fine upstanding gentleman that I am, however, I decided not to just run the person down. Anyway, right across the street from me, in front of a barbershop two guys were arguing when one of them pulls out a gun and shoots the other one three times. He looks around a couple times, I guess to make sure that no one was looking. I'd say that there were maybe a dozen people on the streets and in cars who were and saw everything. It then dawns on the guy that maybe shooting another guy on a crowded street at the tail end of rush hour was probably not the best idea. I've never shot anyone before, but I imagine that seeing at least 6 people on cell phones (myself included) dialing 911 and then standing there looking at all of us while the other guy is bleeding out next to you, and while you're holding a smoking gun in your hand is probably a bad idea. So he decides to run. Right past me and down the alley on the other side of the street.

911 has me on hold for a bit, because you know, answering the phone promptly isn't a concern of theirs. Its not like anyone would call them in the middle of an attempted homicide, right? So when they answer the phone a minute later, a cop is already driving by just by circumstance, so I tell them never mind and hang up and go to give my statement.

It takes maybe 15-20 minutes before the cops are ready to deal with me because they (4 cars by then, plus an ambulance) are too busy trying to shoo away (and sometimes threaten away -- "Hey, just give me a reason, buddy. Come on and give me a reason" -- I hate America) the crowd of 50 screaming black people who all of whom seemed to be related to the guy who just got shot. I'm honestly not sure why the cops decided that I was the one witness worth talking to, and not just another concerned relative. Maybe they sensed my innate chinamaness, or maybe it was just the fact that I was the only one waiting calmy to talk to them and not screaming that my brother/cousin/friend just got shot and go get that mother fucker.

They finally get around to talking to me and I can basically tell them what the guy was wearing and which way he was heading, all of which you'd think he'd have the sense to change seeing as how he shot a guy 20 minutes ago, and he knows there are a dozen witnesses, including the guy he shot, who was pretty clearly not dead, and pretty clearly knew who he was. But hey, the cops were really interested in the guys fashion sense, and what am I if not a fine upstanding citizen, right?

So anyway, I gave the statement and my contact info and such. And came home. I will say that I was happy with the cops actually putting in my description of how tall, old and big the guy was, as well as what he was wearing on the APB I heard them call out instead of just going with the good old "suspicious looking black male" that I remember so fondly from my youth. Gives one a hope for the future. But what's really bugging me now is: WHERE WAS THE FUCKING MEDIA!?! I'm apparently the single dependable material witness to a shooting that took place 15 feet from me, and not one reporter is there to interview me? Not one camera. Nothing!

What's the point of me being a media whore if no one is going to cover me. *sigh*
Collapse