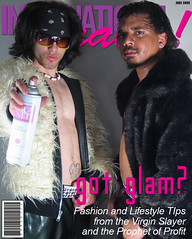 GotGlam
Originally uploaded by chrismaverick.
ok, not exclusively. Several lovely and delightful young women have come to me and specifically complained about how I only did a sexiest women poll. And that I should a sexiest men poll.

I personally maintain that a sexiest men poll is stupid and derivative. That not enough people are going to vote in it to make it worthwhile. And that in the end it won't really amount to much of anything. But I am nothing if not fair and balanced.

So here we go. Introducing The Hottest Men Alive - 2006 Edition. Same rules as the chick contest. List your top five to ten sexiest men, in order. Men wil get 10 points for being voted first, nine for being voted second, and so on, down to 1 point for being voted 10th. Tell all your friends to come and vote too and in the end I'll tabulate everything just like before and after a week (next Sunday) I'll post who the winners are and we can all discuss it, bash the results and come to the conclusion that the whole thing was pointless because men aren't really all that sexy. Other than me of course.

Men and women of any sexual preference are both welcome to vote and feel free to invite people I don't know to vote. in fact I encourage it. It'll probably make for a better cross section.
Collapse