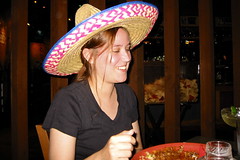 Steph in a Birthday Sombrero
Originally uploaded by chrismaverick.
so yesterday I was speaking with the lovely and charming

marsinthestars and wishing her a happy birthday (which was yesterday) and asking her what she had done for it. The night before I had spoken to her online at like 11pm and was wondering why the hell a person would be at home sitting around talking to people online at 11pm, an hour before she turns 21. It made no sense. So I ordered her to go out and find a bar that she could order a drink at at promptly midnight. I'm told she had a white russian.

So anyway, Marli and I were talking about the nature of birthdays and she theorized that there was a problem with the fact that people put so much weight on the "Big Birthdays" that the all the other ones kinda get pushed by the wayside and relegated to afterthoughts. She claimed that her 20th birthday was possessed of much awesomeness, and its ashame that this birthday #21 was automatically supposed to be more important. I should really have demanded that she order something stronger, like a tequila. Ah well. We live and learn.

It got me thinking. What are the big birthdays? Which ones are relevant to you and why? And which ones were the most memorable for you? Off the top of my head, milestone birthdays are:

So those were just off the top of my head. But it doesn't answer so many questions. Like when are you a grown-up? I'm not sure I am now. Are those ages even right? Would you move anything around? Change how anything worked? Like, if it were up to me, I'd probably keep driving at 16, but maybe move sex down to 14. I'm torn there. I'd probably move all the 18 and 21 stuff down to 16. At least the 21 stuff down to 18. If you're old enough to die for your country you're old enough to play some fucking blackjack (and you're sure as hell old enough to drink, that should happen way by like 14). Everything else is more reasonable, but I am more and more feeling like I want to make the retirement age, oh, I dunno, 32. What do other people think? What would you change? What would you add or remove? Did I miss any?

Are milestone birthday's stupid? Did you (or will you) feel compelled to drink on your 21st? Smoke on your 18th? Did your parents really change the locks? Are birthday's special at all, or do you not make a big deal of them and care more about other events or occasions? How cute is Steph in that hat? Does Marli have a point about making a big deal of the milestones thus making the others seem superfluous?

In other news, Jammy Jam 2006 is nearly upon us. I'm still open for suggestions of alternate games, activities and prizes. Or any other ideas you have that might make the whole thing more exciting. So far we definitely have much beer and licquor, the traditional jammies contest and 3 live bands. Suggestions for additional activities have included a kissing contest, twister, karaoke and hottubbing. Let me know what you're thinking. I was also thinking I wanted to have body-painted girls like they do at the Playboy mansion parties (pictures of naked playmates in nothing but bodypaint are pretty much NSFW, btw). But alas I have no idea where to get the girls or someone capable of doing that awesome a design, and I am going to be a lowly poor and unemployed bum by the time jammy jam rolls around (Jigga, 4 more days of work... this is killing me). But hey, if some hottie wants to volunteer to come to jammy jam in painted on lingerie, I'm certainly not going to stop you.

Oddly, I associate my celebrating much more with Jammy Jam (which will be July 29th) than I do with my actual birthday (August 1st). Never fear however, presents will happily be accepted on either date. And of course, as we are entering that mid-life crisis phase, I would love to recieve a nice little sportscar for the occasion. I'm not greedy, I won't complain if you all chip in. Or you know, if anyone wants to lend me a 16 year old hottie for a couple of hours starting just before midnight on the 31st, that might be cool too.
Collapse