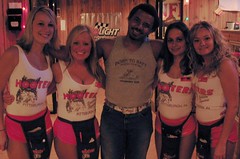 8-20-06
Originally uploaded by chrismaverick.
So back on Sunday, I went to watch a wrestling PPV at Hooters with

beststephi of course didn't go, because it was a wrestling thing and a Hooters thing and she hates both. But that brings up something I have been thinking about. You see, Steph admits that she's never been to Hooters. She has no idea what its like. She just seems to have this vague understanding that the environment is somehow sexist and inappropriate. Clearly if you look at the picture to the right, you can see that nothing could be farther from the truth. :-)

Really though, it always surprises me how many women claim that sort of thing about Hooters or strip clubs or men's magazines or whatever without having actually been there. Ok, granted, its pretty obvious that there is kind of a sexy-inspired theme to Hooters, but sexist? Hardly. More campy and tacky (in a fun way) than anything else.

What's wrong with having a fun sexist kind of place anyway. Yes, if you go to a strip club, you are going there to objectify women. But its totally consensual. That's the point. Its the place where such behavior is acceptable. And I wouldn't call it sexist, because women can go too. But objectifying certainly.

I've been asked before how I would feel if there were a male version of the Hooters restaurant called "Cocks" or something like that and wouldn't I be offended and not want to go. Honestly, if such a thing existed, I think I'd have to show up some time.

So where do other people stand on Hooters? Both male and female. Are you offended by it? Ever been to one? What about strip clubs? What about male versions of either establishment?