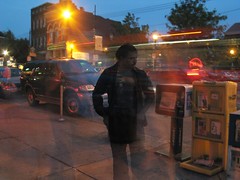 8-17-06
Originally uploaded by chrismaverick.
I've been paying a lot of attention to Flickr and my 365 Days project the last week or so and haven't been watching LJ as closely as I probably should. So if I missed anything really big or important that you expected me to comment on, you should probably tell me. Sorry.

So anyway, I've been noticing a trend lately. There's been a lot of talk about the end of the world. I mean, granted there's always talk of the end of the world, but I mean beyond inbred kooks with an IQ of 40 standing on the street corner with a bible in one hand and a picket sign in the other waiting to be raptured up into the sky. I mean I'm starting to notice honest to goodness signs.

It all started a few months ago, when Al Gore, bored with the internet, decided to invent Global Warming. Al might not be president, but you have to respect a guy who basically makes a powerpoint presentation, films himself giving it with a handheld camcorder and releases it and people still pay 9 bucks to go see it.

But it didn't stop with Al. Just tonight on TV there was a 20/20 and a Southpark on at the same time heralding the end of the world. As well as news programs on each network talking about the next great weather pattern that will wreak havoc on our nation as well as Wheel of Fortune warning us to be prepared because Katrina could happen again. That was all tonight. Like since I've been home from work. Yes. Wheel of Fortune.

I've been thinking about this a lot lately. Maybe I'm a visionary, maybe my mind is just spinning from reading too many Ultimate X-men comic books and waiting for Heroes to start on NBC this fall. But I think the world may be changing. Hear me out.

jameel and I have long spouted about the power of Bovine Growth Hormone creating a race of superhuman beings, but what if its more than that. What if BGH isn't just some happy side-effect of a generous fast-food industry. Maybe its nature's way of preparing us for things to come. Perhaps the world knows that being built with an adamhughesian frame will make us better able to survive in a post-human environment. Perhaps evolution is simply guiding us so that we can make the transition to Homo Sapien Superior. HOVA does work in mysterious ways. And as sure as I know that Jigga is the Supreme Being in the universe, I am quite certain that if he were to evolve the species, it would be toward men with prison muscles and women with tiny waists and big boobs and asses. For God-MC so loved the world...

Anyway, so say the world is changing. Through the consumption of fast food, the erosion of the ozone layer, man-waged world war, the detonation of nuclear, biological and chemical weapons and maybe a stray comet ramming into the planet, its pretty clear that we are on the cusp of the next great phase in terran history. If I've learned anything in the last 32 years of addiction to TV, movies and comic books, its that there are basically three ways that this can all go down.

1) Gradually over the next several years more or more people begin to emerge with posthuman mutant abilities. The world will initially hate and fear them as they do any minority and will attempt to cast them out of society and destroy them. However as darwinian evolution will basically favor these children of the atom over the modern human unilaterally, they will eventually inherit the earth.

2) There will be a great war over religion, or politics, or oil, or snakes on a plane and someone will eventually release a power weapon of mass destruction. This will cause a chain reaction of weapon releases and natural disasters that will wreak havoc with the planet. The weak will perish but the strong will regroup, relocating to remote locations donning leather, metal and laytex and modifying vehicles for combat in a world at war where might makes right and the victor will eventually inherit the earth.

3) Pluto, no longer accepted as a planet falls out of orbit, hurtling between the Earth and the Moon, unleashing cosmic destruction. Man's civilization is cast in ruin. Two thousand years later, Earth is reborn,a strange new world rises from the old: a world of savagery, super science, and sorcery. A man's worth is now judged by the speed of his blade and freedom is the most valuable commodity. Eventually, the Mok will inherit the earth.

In any case, clearly some changes are a foot. So I ask, how do you think the world will end and are you prepared for it?

In all seriousness, If the world were to be thrown into disarray tomorrow, say, just off the top of my head, a massive hurricane caused flood all but submerges your city and throws life into chaos, do you think you'd be prepared to survive?

And in the wildest restructuring of the world as we know it, would you want to be one of the mutant metahumans or would you prefer to stay as you are. Would you consider mutation a loss of your humanity or would you not care. If you were to be evolved into the next stage of human development, what would you want your powers to be?

Do you think this is all ridiculous or is there any logic to what I've predicted here? [cue the ominous music and the booming Dateline NBC/Movie Trailor voice] COULD IT REALLY HAPPEN?!?!?!?
Collapse