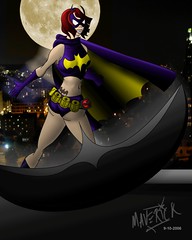 Batgirl Redesigned...
Originally uploaded by chrismaverick.
I had been meaning to do the Batgirl Meme since I first saw it way back in January, but I'm lame and I never actually got around to it til just now. If you're into comics and or drawing though, you should totally do the batgirl meme. Just because its interesting.

max1975, I'm looking in your general directions. Everyone else too. It doesn't actually require artistic talent. Just an excuse to go draw something and compare it to other peoples. The quality ranges from stick figures to full painting. Anyway, its quite simple really. Draw a picture of Batgirl (you get to redesign the costume and character however you want, so you don't really have to know anything about Batgirl) and post it to your LJ. Then comment here so you can be added to the list of people who've done it.

So anyway, I decided to draw this pic in Illustrator just so I could get used to drawing in Illustrator (there are a lot of things I don't like about the final piece. But I'd never actually done it this way before and I really wanted to try it out. I learned a lot and may have to do another one sometimes soon) and while I was working on it, I asked the always lovely and talented

beststephi for feedback on the pic in progress. Because Steph is Steph and I am me, this sparked a predictable conversation on the sexiness of the costume.

Steph wanted to know why I depicted Batgirl as sexy rather than tough which she seemed to think would make for a better superhero. I've never been one for the overtly sexy Lady Death and Dawn types, but it seems to somehow make since to me that a superheroine outfit would at least be kind of sexy.

So it got me to thinking. How do people feel about the visual portrayals of superheroes. I always hear people complaining about Playboy and Cosmo giving young girls poor body images. It's not limited to magazines either, because you hear the same thing about Barbie. But I haven't really heard anything about comics Seducing the Innocent since 1954. Do we not care about the violence any more? What about the sex? What about the body image thing? Do we not care because girls don't read comics (mostly)? But girls don't read Playboy (mostly). Why do we care about that?

So obviously, I kind of sexied up the Batgirl uniform. If I were really running around from rooftop to rooftop, I'd want as much kevlar protection as possible, and no cape. But in a comic, we're offering a 13 year old male wet-dream vision of a woman. So I went this way instead. So I wonder, what do people look for in their superheroes? Both male and female. Are you looking for gritty realism, in the way they're visually portrayed or sjould they be ridiculously idealized as I've done? Do you think its harmful to have to young girls to have Vampirella and Witchblade. Personally I don't know that I believe its any more harmful than seeing The Hulk running around in his underwear is to little boys.

Anyway, let me know what you think. And as I'm sure a lot of people will mention in the next 26 hours or so, take a moment tomorrow to remember the tragedy of 5 years ago.