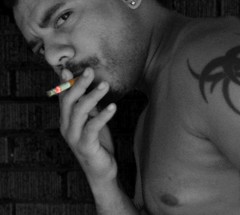 8-19-06
Originally uploaded by chrismaverick.
I was going to wait til after work to rant on this when I could sit down and really think it through to get down a good 1000 words of free flowing hostility, but since I've already addressed it a few times in

sonbanon's post and its the superhot topic of discussion of the moment in my office, I figured I might as well take a break and jot down my thoughts.

Today, the Allgheny County Council voted to ban smoking in all bars, restaurants and similar establishments. This sucks. And not just because I am a smokter. It sucks because it is a complete denial of rights of the establishment. It is the same as Prohibition. This is not an issue of second hand smoke. People like to write it up like it is. But it isn't. Its an issue of where the public has a right to enforce its will. Is my local bar a public place or not? I say it isn't. It is a private establishment owned by a private owner. Not owned by the people. The owner makes the decision to allow me to come in and buy alcolhol from him. He should be able to decide whether he wants to allow me to smoke or not. The problem is that non-smokers like to say that they have the right to go to the bar and not be exposed to smoke. They do not. They have the right to go somewhere that is smoke free. The bar doesn't belong to them.

If someone wanted to propose a bill that banned smoking in outdoor public parks, I'd actually be all for it. Do I believe second hand smoke is harmful? Honestly, I do. I don't know that it is. But I'm willing to make the assumption that it probably isn't good for you, so you shouldn't have to be exposed to it. But there is no reason you shouldn't be able to open a bar that doesn't allow smoking. And there is no reason you shouldn't be able to open a bar that does. Do I think explicit rap lyrics are harmful? Not at all, but I support Walmart's decision to not sell them. Similarly, I support Target's decision to not sell cigarrettes. But I don't think we should stop Target from selling Eminem's CDs and I don't think we should stop Walmart from selling Marlboros. They each made their decision, and I think the world has dealt with it just fine. I know plenty of people who won't shop at Walmart because they have a problem with some policy of theirs or another. And I think that's a fine way to feel. The Squirell Hill Cafe (or the Cage, as its Patrons like to call it) exists for one reason and one reason only. Its a place where people can go and have a beer, a coffee and a cigarette. If you take any of that away, its not the same place and I don't want to be there anymore.

As one of the bar owners who was interviewed about this pointed out, its really sad because this is going to cost people jobs. Smoking is an indulgance. As is drinking. And if the 18th Ammendment taught us anything, its that people aren't going to stop doing something they want to do just because you made it inconvenient. They're just going to do it somewhere where you can't see it, and things are going to get bad.

Unilateral banning is just stupid. If someone really wanted to solve the problem, then why not suggest this solution. 50% (or 40 or 60 or whatever seems right) of Allegheny County licquor licenses must be awarded to non-smoking establishments. If that were the case, then there is suddenly no issue at all. If we did this then one of two things would happen. Either everyone would have what they wanted, or you'd have a whole bunch of really popular smoking bars and some lame non-smoking bars (or vice versa). But isn't having choice always good?

My big problem with this is that its an obvious slippery slope problem. If you're a non-smoker, its easy to say "oh wow, this will be great." But then what happens if someone wants to ban pro-wrestling because watching it might be harmful to children. Or they want to ban Howard Stern. Or abortion. They are all exactly the same issue. Do I like that there are country clubs that don't allow black people, or golf clubs that don't allow women? No, but I also don't like that there are all black fraternities or all women gyms. But I acknowledge that without those places being allowed to exist then we also can't have all jewish houses of worship or rated R movies, and that's what I think we're dealing with here.

Ok, there's my two cents. Let me know where you fall on this?
Collapse