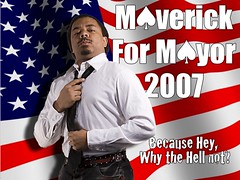 12-5-06
Originally uploaded by chrismaverick.
So I've mentioned several times in the past that people should consider me automatically running for any unopposed offices. I always write myself in. But this weekend at dinner

sui66iy and others started asking me why I don't run for mayor next year. You see, there's going to be a special election to officially replace recently deceased mayor , Bob O'Conner. The front runner right now is Luke Ravenstahl, the current acting mayor, and 26 year old kid. And it got me to thinking, maybe I could have a legitimate go of it.

I've always pretty much acknowledged that given my wacky politics and my refusal to join either party I couldn't win, but now I'm thinking if a 26 year old, with no real experience, can be mayor. Why not me. So I told Mike I'd form an exploratory committee to look into the idea. (no one just announces they're running for office. You always need to form a committee to investigate the possibility).

Welcome to the exploratory committee!

So there are two issues on the table. Feasibility and Electability.

Starting with feasibility. How hard would it be for me to even get on the ballot? What does one need to do in order to get that? I'd assume some certain number of signatures. How many? I've thought about running for city council before, but I figure any support I'm likely to get is going to come from the internet and maybe random crazy wrestling fans. In other words, I figure that my support base isn't geographically centered in any particular district or ward. But the internet covers all of the city of Pittsburgh, so mayor is probably actually easier for me than city council or a state congress seat or something. Anyway, someone needs to find out what I have to do to actually get on the ballot. Who wants to be in charge of that?

And now electability. Who would vote for me? I for one think I'd be excellent at the job. I mean look how mayoral I look in that poster over there. And if there was ever a man of the people, its got to be me. I mean, my politics are right out here online for everyone to read. And I'm right here conferring with the people on every single issue. And as I already pointed out, but its worth saying again... I mean look at me... damn, I'm pretty!

So anyway. Who thinks I should do it? Who would vote for me? Who would help me campaign. I'm really curious as to how well I could do. And I would definitely need help, so by all means feel free to post this in your blog and invite other people I don't know to come comment on this. Consider it lobbying.

Finally, in closing... NO DESK FOR KAYLIE!

EDIT: Also, what issues would you like to see me standing for?
Collapse