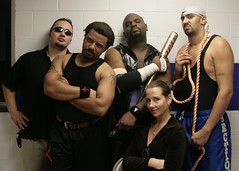 10-1-06
Originally uploaded by chrismaverick.
It's that time again. Every February is Black History Month. The country spends a wopping 28 days trying to pretend they care about the contributions of African Americans over the course of the last couple hundred years. Mostly by having all the major networks air little promos in every commercial break thanking George Washington Carver for inventing the peanut.

We've all heard the jokes before. Why did they have to give the blacks the shortest month of the year? As an asiatic black man, my people are responsible for the creation of this country's cotton industry and the railroad, so no one has as much reason to be proud of the blacks (or the chinaman) as I do. But, I do feel like the pretense that the month of February is dedicated to the blacks is just silly at this point. Exactly how is it dedicated to us? What do we get? I see no annual reparations check. I don't see us all getting the month of February off (though I'll grant, I'm unemployed at the moment, but still). What do we get? We get George Washington Carver commercials.

And we get these idiots. Not actually a Black History month celebration. But a celebration of Martin Luther Kings birthday, by a bunch of white kids, who think its somehow cool to have an annual party where they dress up like black stereotypes. If it were one of my parties it'd be called Porch Monkey Jam. But it's not a Maverick Jam, as

jameel says, its a bunch of white boys trying to look hard while drinking Keystone Light.

And of course they got in trouble.

beststephi asked me if I thought they should have. And actually I don't. Hell, they could have called it Nigger Jam and I really wouldn't have been that upset. Well, maybe a little mad for gimmick infringement. But looking at the pictures, their party just doesn't look all that great. It looks like a bunch of kids who are no where near as cool as they want to be. It's sad, really. The party just looks kinda lame.

But really if a bunch of kids want to be offensively racist and have a party to celebrate it, I say more power to them. Maybe instead of having Catholic School Jam next I should have Jew Jam. I'm not really sure how you throw a jewish costume contest, but I bet I can figure it out, and I bet it would involve most of the girls at the party walking around half naked.

Also... I'm still thinking about Catholic School Jam/Vicars and Tarts Jam. Didn't get a lot of response on it last time. Are poeple interested or should I just hold off on parties til Aloha Jam. And also, I am but a poor unemployed chinaman. If I were to throw something together in Feb. or early March, who would be willing to donate to the cause?
Collapse