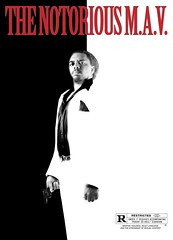 3-7-07
Originally uploaded by chrismaverick.
So, in the midst of my 365 Days project (avaliable for viewing on LiveJournal at

365mav - cheap plug), I got into a discussion as to what the better movie is between Scarface and The Matrix. I am of the opinion that while I am actually a big fan of the first Matrix film but I'd argue that Scarface is the better movie. Matrix is of course very enjoyable, but at the end of the day is just a REALLY GOOD sci-fi/aciton pic. Scarface on the other hand I'd argue is a more DEFINITIVE example of an crime/action drama.

It's not about which movie you or I like better, that's a completely separate issue. Personal tastes come into view. I'd argue that there are specific quantitative aspects by which one can judge art. I always think its funny when someone mentions a singer, like say Jessica Simpson and calls her untalented. That's obviously untrue, she's quite talented (even beyond the obvious assets in front of her). She's not the MOST talented of course, but she's clearly a superior singer to say Ozzy Osborne, The fact that I may like Ozzy's music better doesn't change that. I'd say it's the same with writers or painters or movie makers and their works. 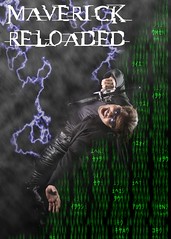 3-19-07
Originally uploaded by chrismaverick.
Now in this specific case I'd argue that Scarface is extremely well written and executed. Even though 24 years later, its kind of dated looking, it's still the kind of work that you could teach a class around. A screenwriting class, an acting class, a directing class or even just a film appreciation class. Matrix on the other hand is only 8 years old at this point and already doesn't stand up that way, in my view. I very much enjoy it, but I also huge fan of Cannibal Women in the Avocado Jungle of Death. I just wouldn't go so far as to call it high art or anything.

So that's my question for this week. How do you judge art? Is it fair to even compare two works? Can you separate whether you like a movie from whether or not its good or not? Does it even make sense to do so? What about other arts? Books? Songs? Even sports teams?

Wow, I know I've been posting less lately as my 365 project has taken up more of my time. But it really feels as though I'm not quite being angry enough either. Maybe I should work on that.
Collapse