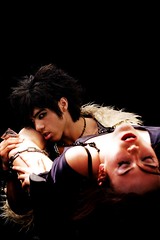 beststephi and I were at a party the other day and I got into a discussion with people about MPAA ratings. What do they mean? Where do they come from?

I was surprised to find out how little people knew about the movie ratings. Most people seemed to think there were specific guidelines of how a movie recieved a certain rating, which I suppose is not that unreasonable an expectation, but is also completely false.

Much like the FCC's guidelines, which I also hate, the MPAA guidelines are entirely arbitrary and pretty much vary from one case to the next. They are based on a "reasonable person" principal, however the obvious problem is that what one person think is reasonable is completely different than what another person thinks.

I guess most people don't realize that a movie rating says the rational right under it. If you look next to the PG-13 or R or whatever, it will say why the film got the rating it did. My favorite of all time is Two Girls and a Guy which was "Rated NC-17 for a scene of explicit sexuality." I love that movie. I've seen it a dozen times at least. I must note that it has no nudity. It has no drug use. No one gets violently shot on screen. What it does have is a single scene where Heather Graham and Robert Downey Jr. have a quickee against the wall in his darkly lit bedroom. No naughty bits are exposed. It all just pantomimed thrusting, kissing and licking. They're not even in their underwear at the time. It's an unzip the pants and hike up the skirt moment In all seriousness, I have seen much more graphic sex on daytime soap operas. What it does have, that the soaps don't, is fuck noises. Not gentle loving moans and gasps. No, it angry grunts and dirty talk. You know... kinda like real sex. In fact, I'd argue it may be one of the most realistic sex scenes ever filmed. Or maybe I should say not filmed, because you never actually see much of anything. But it was given an NC-17 because Graham and Downey know how to act. Or at least, they know what good fucking sounds like.

I've found that a lot of ratings systems follow arbitrary systems like this. Flickr recently implemented a self rating system for photos that are uploaded. We are instructed to mark our photos as "Safe," "Moderate," or "Restricted." However, there's no real guidelines of what constitutes what, other than to state that Safe is safe, Restricted is stuff "you wouldn't want your mom to see." and moderate is for stuff inbetween. But what do you do if your mom is cool. My mom is very cool, and in fact reads my blog and looks at all of my pictures on flickr, and I'm pretty sure she's seen naked people before then in any case. So does that mean I can just mark everything Safe?

What about the picture I included on this post. Is it ok? Is it worksafe? Obviously its sexual. But it specifically and intentionally doesn't show any naughty bits at all. In fact, when I took this shot, I took care to not make it at all obvious where hands were or what was going on. I think the imagination takes it a lot farther. So what should the rating be on it? What about in the MPAA system? Do you think its worksafe yourself? How do you arrive at that conclusion?

Last week, Steph and I watched a great documentary called This Film Is Not Yet Rated. It explores the MPAA and filmratings, albeit from a biased, very pro-filmmaker, anti-MPAA point-of-view, but its quite good. But it poses an interesting question. How useful are the ratings anyway. If they're more or less arbitrary, and no one understands what they mean, then are they actually useful to anyone? Does anyone reading this actually pay attention to film-ratings? Do you use them to decide what to view for yourself? What about for your children? Do you read the little blurbs about why a film is rated how it is?

I'm sure I had other thoughts on this as well, but I'm actually starting to get tired, so i'm going to sleep. But I'd love to know people's feelings on this.
Collapse