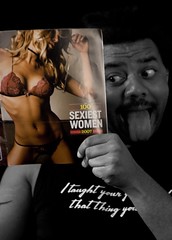 5-14-07
Originally uploaded by chrismaverick.
About a year ago, I was having a conversation with people about the annual sexiest women/men alive surveys that a lot of magazines do. . I decided to run my own version of the contest on my blog. I gave people one week to vote on who they believe the top 10 sexiest women in the world were. I used a weighted scoring system. If you ranked a woman #10 she got one point. #9 gave her two points. And so on, all the way up to #1 which was worth ten points. In all 437 votes were collected on 53 ballots for 218 women and as I had predicted we ended up with a Top 10 Sexiest Women that was quite similar to the ones being offered by Maxim, FHM, and Stuff magazines, but different as well.

My version of the list was so successful and good in fact, that I managed to drive the US version of FHM magazine out of business. (that's my story and I'm sticking to it).

Now, I'm doing it again. I'd like the survey to be even more successful this year, so I figure I might as well get votes from all my flickr friends as well. So here's what I need you to do: Just pick ten and list them in order. Voting closes at 12:01AM eastern on Tuesday, May 22nd. I'll tabulate the results and post them.

Oh, and tell all your friends to come vote too. This should be fun.
Collapse