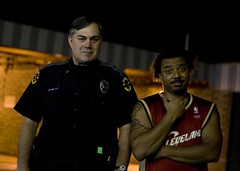 8-4-07
Originally uploaded by chrismaverick.
Note:Generally I don't crosspost my

365mav daily posts. But this was interesting enough that I felt like I should. I make light of it here, but I guess in reality I'm lucky I didn't get shot and had some crack spinkled on me.

The trials and tribulations of being a black man.

Had a wrestling show today. My car was acting up again, so Steph dropped me off. After the show I walked to a gas station not far away to buy cigarettes, a bottle of water and a cookie and wait for her to pick me up. Just as I was standing around wondering what the hell I was going to use for my 365 days shot so late in the day, two cop cars pulled up next to me.

"What are you doing sir?"

If my people have learned anything over the years, it's to be as polite and cordial to the police as possible. I certainly wasn't looking to have my ass Rodney Kinged tonight.

Apparently someone decided I looked suspicious standing around in front of a gas station and eating a cookie so they called the cops. The cops rushed to the scene to apprehend the suspicious looking 5'8 black man brandishing a chocolate chip cookie and a bottle of Aquafina. They took my license and ran it through their computer and of course came up with nothing. Then they asked me what I was doing so far from home (the show was about 30 min away) and I had to explain being a professional wrestler. Eventually they decided to buy my story and wished me a good day. I did manage to get one of them to agree to pose with me for this shot. That kind of threw them I think. They probably don't have many suspects asking them to pose for pictures. I thought of having him pretend to arrest and cuff me, but decided that it was better not to push my luck.

I'm glad I didn't wear my "I'd rather be fighting the man" T-shirt today.

Steph arrived to pick me about 5 min. after they finally left me alone. I wonder if they would have arrested me on the spot if they knew I was boinking a white woman.