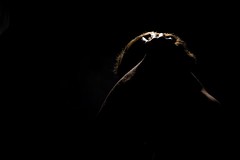 9-19-07
Originally uploaded by chrismaverick.
If you are a regular reader of

365mav you might note that there was no update yesterday. I did not quit. Flickr decided that I hadn't been moderating my content appropriately, so they marked my account as "moderate". Which essentially means I don't show up in public searches. My photos are still there. They simply aren't exported to the outside of the world. You can find me if you're actively looking for me, but that's it.

This upset me because, though I have obviously posted nudes to flickr, I have taken great care to flag all of them as moderate on my own so as to avoid this very thing happening. I felt that I was within the guidelines. Yesterday, flickr decided (without telling me) that I wasn't. Once I realized I started working to fix the problem, but they won't tell me what I've posted that is offensive to them. At this point I have marked ever nude, implied nude and lingerie shot in my stream as moderate and I have still not been unlocked.

I posted this as today's entry. It may be my last.

If a photographer posts in the middle of flickr and there is no one there to see it, has he really posted?

So we're now past 24 hours of me being marked moderate on flickr and casual viewers not being able to see my photos. I am very depressed about it. I know it sounds silly, but you have no idea how much of my mentality is wrapped up in being an artist these days. That's why I was always so careful about moderating my photos.A lot of people would actually tell me "oh, that's not bad nudity, you can post that" and I wouldn't because I didn't want to take the chance of being censored. Now I have been.

Last night I went through and marked everything I had tagged nude as moderate, including implied nudes that showed no actual naughty bits. I have always been very good about tagging as well. I had written flickr several times asking what guidelines they wanted me to follow and each time they simply explained to me how to moderate things (I already knew) and not what I was doing that was over the line. I asked for a re-review. I was denied and told:

You still need to be more restrictive in moderating your photostream. You might consider leaving your account classified as "moderate" just to be on the safe side.

Which I considered to be about the most condescending thing ever. Fine, its not my site. It's yahoo's, and rules are rules. But I have repeatedly said (across 5 messages yesterday) that I was willing to comply if I was simply told what it was that they had a problem with. They have refused.

I have now marked every shot I have ever taken that was nude, implied nude, or lingerie as "moderate." This is far more restrictive than just about anyone that I pay attention to.

I am at a loss. I depend on this site as a creative outlet. It is a way to show my work to an audience that I might not normally encounter. Yes, I am aware that people can still see my stuff if they are looking for me specifically, but honestly, I was popular enough on LJ and through my own website that anyone who was already aware of me knew where to find me. What I loved most about this site was that people who I had never heard of before and who never heard of me, were able to simply encounter me and give feedback. I said this sometime ago, during that whole being unemployed thing, that even without a job for a significant portion of it, that first year of 365 was possibly the happiest that I'd ever been in my life as an artist. Even the first time I had a short story published didn't make me feel that way. It wasn't about the money. It wasn't about the showing off. It was about the fact that I had a direct link to people I didn't know who would tell me that something I did changed their lives. That is gone now.

I have been a flickr member since December 5th, 2004. I have posted faithfully every single day for the 365 days project for 404, straight days. I have had hundreds if not thousands of people tell me directly how much I have touched and changed their lives. It has meant the world to me.

There have been good days and bad days. But in all honesty, today is the first day that I have ever, EVER wanted to simply quit.

There aren't many things in this life that I actively care about. There really aren't. Despite what it may seem like, I'm really just kind of a cynical, depressed, asshole of a guy. I may have a heart of gold, but at essence, that's what I am. This was one of those few things I cared about.