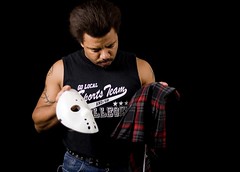 10-4-07
Originally uploaded by chrismaverick.
Note: Once again, cribbed from a 365 post. I'm getting way too lazy to keep two blogs

So it was a big long day. Got up early and had my truck towed to the mechanic. It's been out of commission since July. Hopefully that won't be the case soon.

Went to work. Got a lot done, but then I learned that the local paper finally ran the article about Sarah and me from when we tried out to be extras in the movie on Sunday. The article is kinda... well, a pointless fluff piece, but hey, there's several quotes from me, and I'm a press whore, so go read it.

Got a phone call from a casting director for the movie. Sarah and I are in. We shoot our feature film debut (such that it is) on Tuesday.

Then this evening, Steph and I walked in the Light the Night Leukemia walk in honor of her brother who died when they were kids. I don't know if I mentioned it before, but I think I might have broken a toe wrestling. It's been bugging me for a several weeks now. So walking was kinda a struggle, but its a good cause and I'm glad I did it.

So anyway, about this shot.

The people are clamoring for another Maverick Jam. Listen... oh can't you hear the clamor? I've been trying to decide what to do about it. This year Halloween falls on a Wednesday (damn right it was a good day) which means that possible Halloween party dates are the 27th and the 3rd. Either could work, but then I was thinking, maybe it would make sense to do something else if I did the 3rd. And then my old idea came back to me again. Catholic School Jam, or perhaps Vicars and Tarts Jam (which has been suggested). Or I could do the good old fashioned Halloween Jam.

Halloween Jam is always fun of course, but Catholic School Jam has the bonus that there'll be tons of Catholic School Girl outfits, and well, we've already discussed >my feelings on that.

So that's the question. When's the better day for a party? October 27th or November 3rd? And which party should it be?