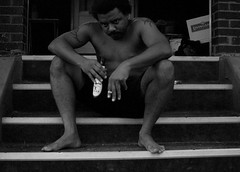 9-7-07
Originally uploaded by chrismaverick.
Note: Originally I was going to use the title "on EFIL4ZAGGIN" but I used it back on Nov 29th, 2006 so I decided to change it up a bit.

This weekend, Bill Cosby and Alvin F. Poussaint were on Meet the Press pimping out their new book Come On People: On the Path from Victims to Victors.

beststephi is a big Meet the Press fan and watches it pretty much every week.

The interview sparked an interesting conversation between us, (and later, my mother,

mamarayne about the current crusades to "ban the "N-word." Steph and my mom seemed to think the word was inappropriate and could never be accepted and should not be used either seriously or in jest, (as many African Americans do in polite conversation today).

If I can paraphrase both Cosby and my mother (as best I can, I'm sure she'll chime in if she disagrees), they made the point that too many people fought and died to not be called nigger and it disrespects their memory to use the word voluntarily now. To paraphrase Steph (again, she'll correct me if I'm wrong), blacks using the word "nigga" makes white people think its ok to use the word.

I tend to disagree with both arguments.

First of all, no one died for the word nigger. And if they did, they are foolish. They died for respect and for a fight against hatred, intolerance and bigotry. The word is merely a symbol of that. A powerful one, I'll grant, but a symbol nonetheless.

At the end of the day, its just a word. Hatred is hatred and ugly is ugly. If tomorrow, we made it a federal crime, punishable by immediate death with no appeal to say the word "nigger" do you know what would happen? There would be a sudden upturn among racists in the usage of the words porchmonkey, coon, spearchucker and jiggaboo. A Klansmen could run into me and call me "boy" or "negro" and I'd know it was offensive merely by his tone of voice. Hell, he could make up a word and call me a "wrikligrubber" and I'd still no he was hating on me. Why? BECAUSE HE'S IN THE FUCKING KLAN!

I asked Steph if she'd be ok if rap songs junked the word "nigga" for "porchmonkey" and she wasn't. So then I asked her if she'd be ok if they junked it in favor of "buddy" and she said that that would be fine, because it's inoffensive. That brings me to my other problem with it. My rationale for why the word MUST continue. What people were actually dying for during the civil rights movement was the right to culture, respect, freedom, and the ability to live their lives in peace, making their own decisions. It is just as wrong of an older generation of blacks to tell a younger generation what words they can and cannot say as it was of the white populace to tell the black populace which restrooms they had to use or which drinking fountain they could sip from.

I get what the word means to people. Really, I've been called it myself. And it does hurt. But taking the word away doesn't remove the hurt or the hatred. It just removes the word. And taking the word away trivializes all that was ever fought for. Rosa Parks didn't suffer so that blacks had to sit in the front of the bus. She suffered so that they could sit anywhere they wanted to.

Later, Steph and I discussed the names of sports teams. I was wearing my Cleveland Indians jersey, in support of their ALCS fight. She asked me how I'd feel if the team were called the Cleveland Slaves. I felt that's different. It's more analogous to call them the Cleveland Negroes or maybe even the Cleveland Spooks. But you know what. It probably wouldn't bother me. But then I'm enlightened like that. I don't think that renaming the Reds, Indians, Braves, Chiefs and Redskins helps remove racism. I think the fact that its an issue is a testament to the fact that the racism still exists. I for one can't wait til the day that the world is so tolerant that you can have an NHL franchise called the Philadelphia Niggas and not offend anyone. That's what I'll call progress.

Until then.... GO TRIBE!
Collapse