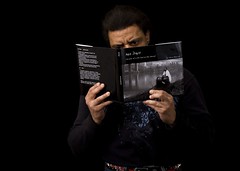 1-4-08
Originally uploaded by chrismaverick.
so, if you've been following

365mav, then you probably already know that I collected the first year of self-portraits together in a nice little coffee table book, which everybody should totally buy because, like I want to be famous and stuff.

Anyway, playing with blurb and self-publishing, I found that I really liked it and I really liked the coffee table book format and I started trying to think what else I could do with it. Eventually, I came up with this idea of having a coffee table book of maybe 20 glamorized fairy tales. Spoofs on Snow White, Little Red Riding Hood, Cinderella and hat not. Not really pornographic per se, But adult oriented and sensualized in the same way that most of my photography is. I've talked to a couple models about it and people seem excited by it.

Anyway, I had lunch with

max1975 today and he thought it was a cool idea and expressed interest in helping me write it. Honestly it had never occurred to me before to even ask anyone else to write it with me. I kind of thought of it as "my thing." I'm REALLY sure that I don't want to share the photography, but I'm torn on the writing.

So here are my questions for people:

And any other input people think is important I'd love to hear too. I'm pretty excited about this one. Geeze, I have way too much going on.

Oh yeah, quick plug, come to my show tomorrow night. You know you want to.
Collapse