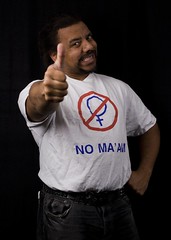 10-17-08
Originally uploaded by chrismaverick.
These days, I do most of my blogging over at

chrismaverick for my rants about general life and politics and such. Stuff that wasn't specifically about me. In practice though, my rants are usually inspired by something that happens in my daily life so I end up ranting over there, and then having to copy the rant over here so as not to bother with writing it twice.

This is one of those days.

I received not one, but two messages today letting me know that my Day 68 photo was linked on some website by someone woman having to do with men's bad ideas.

The gist of of both people's messages was that the woman links to pics without their permission. While they have a point, I've long since accepted that being on the internet, posting pictures, means that inevitably, people are going to use my shit without my permission. Really, it happens all the time. Some could argue it's fair use. Some could argue it's copyright infringement, but it's clear that in 2008, the laws about what you can and can't do with someone else's picture just don't keep up with the way reality works. I just accept it. In a perfect world, I'd be getting some kind of royalties everytime someone uses my stuff. The world is not perfect. Que sera, que sera.

What's funny is the context in which the image is being used. Some woman is using my photo to illustrate that threesomes are bad ideas (as well as using other photos to illustrate other "male" ideas are bad).

I don't pretend that I'm perfect, or that I make sense all the time. But I am pretty forthcoming with my beliefs, as crazy and fucked up as they may be. I write about them all the time. And if you're paying attention, you might be able to guess that I totally don't have a problem with the concept at all (while that isn't actually what that picture was about).

Funny story. Last year, around Christmas, I was at Walmart standing in the express line to buy a pack of cigarrettes. The woman in front of me was looking through tabloids while she waited, and one had a picture of Angelina Jolie and Brad Pitt on the cover. She turned to me and started complaining about them. "I just don't get this Angelina Jolie thing. Men like her they must be crazy."

Now a little backstory. Unlike, apparently, 99.9999% of my gender I don't find Angelina Jolie hot. Don't get me wrong. She's not ugly or anything. She's even kind of pretty. But I don't think she's especially sexier than maybe 100 other women that i know in real life. She's the kinda chick that if I saw her at the club, I'd be like "oh, ummm... yeah, I guess she's kinda cute." and then I'd probably go back to my drink. It's not like I'd be like "Dayumn! I have to ask her to dance." So I figured, "oh, this woman feels the same way about her as me." and I mumbled a half hearted "yep" to her. I guess she took this as approval to enter a full fledged conversation with me, and began ranting.

"I mean, she's just disgusting. I don't see why Brad stays with her. You know, she does it with other women. That's just gross. It's wrong. It's disgusting. Why anyone would think twice about her, knowing she's into that sort of thing is beyond me."

I just kind of stared at her while she was ranting about the grossness of Angelina's lesbian dalliances and finally when I could tell she was looking to me for validation I said, "ummm, sorry lady. You got the wrong guy." She turned away in a huff and then we ignored each other.

It shouldn't surprise anyone at this point to know that my views on sex are EXTREMELY liberal. You want to fuck people of the same gender. Good for you. You want to fuck the starting lineup of the Dallas Cowboys all at once, again... I say go you. Hell, you enjoy giving head to barnyard animals, well... so long as the animals don't complain, who am I to stand in your way. If you're a good old fashioned, sex only for procreation, in the bounds of marriage and anything but the missionary position makes the baby Jesus cry. Well, I say you're missing out on all the great homosexual orgies with livestock, but hey, so long as you're happy, it's none of my business.

But really, what is it about my face that makes people just assume that I'd agree with them on whatever. It's not even just sex. People never really ask me "who do you support for president?" Liberals assume I'd go with Obama. Conservatives assume I'd go with McCain. I mean, I'd totally get the "oh, he's a black guy, he must be an Obama guy" thing, but it's not just that way. People just think I must feel the way they do.

Bt especially with sex. I've had gay people assume I'm gay. I've had polyamorous people assume I'm poly. And the straight, monogamous people just assume I'm one of them. Really I don't mind one way or the other, first impressions are what they are. But if you actually took the time to read anything I write ever (or worse, have a conversation with me for like more than 10 min.) it should really be pretty evident that about politics, sex, drugs, crime, religion, homosexuality and most other social issues... I'm pretty much fucking nuts.

So uh, yeah... If you're trying to blog about traditional values and linking to me... "ummm, sorry lady, you got the wrong guy!"