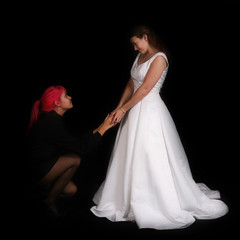 Day 281: Wishful Thoughts.
Originally uploaded by SaylaMarz.
I had it all figured out. It was very simple really. First I was going to get a sex change. Then once I was a girl I was going to move to San Francisco and become a lesbian. Then I was going to convince my friend,

see_me_naked, aka Sayla Marz, aka Brigid, to come there and marry me. We'd be one big happy lesbian family with tons of little lesbian kids running around (I could freeze my sperm before the operation). What could be better than that?

Only then Prop 8 passed and ruined all my plans. Now I'm just going to have to stay a dude. Sorry Brigid.

Actually, Brigid and I had been talking about Prop 8 a lot the last couple weeks before the election. She has this whole vested interest in it what with being one of them there gays and all.

I didn't really say it, but I was pretty sure that Prop 8 would pass right from the beginning. Actually, to be honest, I'm amazed it came as close to being voted down as it did.

Brigid said something to me the night after the election. She couldn't believe that in a world that's come so far as to finally elect a black president, people could still be so hateful and vindictive as to deny the basic civil right of being able to love another person. I've heard similar arguments from other friends, both straight and gay alike over the last couple days. So I've been sitting around and kind of thinking about it and trying to sort my feelings out about it.

I think I've made my feelings on gay marriage pretty clear. My personal plan was to make an amendment not only abolishing gay marriage, but the whole legal definition of marriage, period. From then on, marriage would be an entirely socio-religious concept and the state would ONLY support civil unions. But I'm a visionary like that.

But most of the world isn't full of free thinking, Jay-Z worshiping, dark-skinned Chinamen like myself. If it were, gay marriage wouldn't be an issue. Nor would racism, illegal drugs, or prostitution. One day, I'll be in charge of the world, and like the great Victor von Doom, I will rule with a firm but fair iron fist, and turn this world into a utopia heretofore unimagined by man. And you will all love it, under penalty of death.

Anyway, as I was telling Brigid, the problem with Prop 8 is it really is what the people want. If you're an alien who comes down from space and moves in with me for a month to learn about the human race, you'd probably come to believe that we're a bunch of sexually uninhibited, hedonistic, morally blurry, atheistic liberals who like to smoke pot in between bisexual orgies and the resulting abortions. But in real life that's not the case. In real life, humans are pretty much self-righteous, selfish, shortsighted pricks. People don't like that which that they don't understand. They fight to maintain the status quo.

Racism didn't just go away. We didn't just happen upon a black president. It took 100 years to get from the freeing of the slaves to the civil rights march on Washington DC. And it took another 45 after that to elect a black president. And you know what? This country is still full of a bunch of racist fucks. Change is slow.

And that's just the thing. Homosexuality has been around since forever. And yeah, gays have been oppressed forever. But really, I'd argue that homosexuality has only been mainstream for about a decade or so, and then only barely. You can't short circuit change. Will the gays get there? Sure, but it's not going to happen over night, and it's going to get a lot worse before it gets better. As sad and awful as it sounds to say, you don't get a Barack Obama in the White House without stepping over the bridge built by the bullet riddled bodies of Martin Luther King Jr. and Malcolm X along the way.

This country just isn't ready for gay marriage yet. And it can't be forced down the country's throat. That just breeds resentment and makes it worse. Of course it needs to happen, because without that resentment the change will never come.

But it's going to be a long slow road. You want proof?

You want to know what helped Obama win? Black people. By all accounts black people came out in record numbers to vote for the black guy. And it worked. It put the black guy over the top. BUT, if you look at the California exit polls you'll see something interesting. 70% of those black people also voted for Prop 8. Why? Because niggers hate faggots.

People will fight this. And well they should. Change will never come if they don't. But it's not going to be an easy fight, and I firmly believe that the wrong battle is being fought. The problem with fighting for equality, the problem with the argument "I'm just like you" is that the truth is, you're not. All people are different, and differences are ok. Trying to say that a gay marriage is just like a hetero one is a losing battle, because there's always going to be obvious differences. What really needs to happen is the world needs to realize that a gay marriage, while different is still a valid institution. And that won't happen without a change of attack. And even then, it won't happen overnight.

Unless we elect me ruler....

Under penalty of death.
Collapse