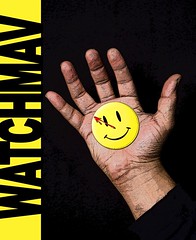 3-6-09
Originally uploaded by chrismaverick.
Saw Watchmen tonight. I had intended to review it here and then link to it from my 365 project, but I ended up pretty much saying everything I wanted over there. So I figured I'd just copy it here.

So today should be a happy day. I've been waiting for a Watchmen movie for the better part of my life. Today that dream came true.

Sometimes dreams should just be dreams.

It certainly wasn't the worst movie ever. In fact, I had intentionally kept my expectations low. I'm quite capable of doing that.

Don't get me wrong, even though I was keeping my expectations low, I really really wanted it to be a good movie. And it had it's moments. I certainly didn't expect it to be as ground breaking and medium changing as the comic was. But I wanted to enjoy it, and there were even things I did enjoy. But there was just too much.

The problem with most adaptations, comic books or otherwise, is that they deviate too far from the source material and they piss off the fans. A lot has been made of the ending to Watchmen being changed. I didn't really care much for the new ending but that wasn't that big a deal. Beyond that, they tried to be "faithful" to the book. To make sure they got every detail in that fans would be looking for.

They should have cut more.

The major text of Watchmen is 384 pages long. To accurately portray it on screen in a minute for minute translation, I'd estimate it'd run about 6 and a half hours or so. Undoable. So they cut it down. Removed all the minor characters. Removed a lot of the minor subplots, and tried to just hit all the major beats that made the story great.

Except, those major moments, while memorable were all very carefully crafted by Alan Moore (the original writer) to tie together all those minor subplots. By breezing through them we ended up with a lot of details that really go nowhere. There are details that occur that while they may look cool don't have any setup because the subtle foreshadowing earlier in the story simply isn't present. There are enough Chekov's guns in the movie to arm a small army.

What this means is we have a movie nearly three hours long that is paced incredibly poorly. Sure it was fun, but it wasn't good. A good adaptation makes me go "wow, that's awesome, I have to read the original book and see what that was like." Watchmen didn't do that. If I had never read the book, and I saw the film and knew everyone loved the book, I'd say "eh, I guess that was ok for a comic book movie, but really, what's all the fuss?"

That's the big issue. There's little ones too. Stylistic problems I had with the cinematography, costuming and special effects. Stylistically, I want Watchmen to be somewhere along the vein of the Dark Knight. Instead, I felt like I got Batman Forever. This is not a good thing. I mean, I guess it's fine, but I don't want to laugh at Watchmen (and make no mistake I was laughing AT it, not WITH it). I want to be engrossed by it. I wasn't. In fact, I really think that if I wasn't already a fan, and wanted to give it a chance I would have been even more annoyed than I am.

Is it worth seeing, I guess. And it's unreasonable to expect it to be as meaningful as the book, so I really worked on convincing myself that it wouldn't be. But I hoped to be pleasantly surprised. And while I certainly didn't expect it to be the best superhero movie ever, I really did think it'd probably be the best one of the year.

But honestly, at this point I can easily see the Wolverine movie or the GI Joe movie blowing it out of the water.
Collapse