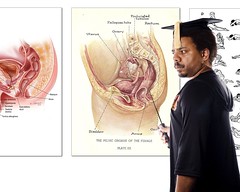 7-12-09
Originally uploaded by chrismaverick.
I originally intended to rant this here, and reference it on my

365mav project. But as I was typing there, I ended up pretty much doing the entire rant. But it really belongs in my blog here. And thus the crosspost.

So ever since I decided to open Maverick's School for Wayward Girls, I've been meaning to work on exactly what curriculum I would teach there. I'd been too busy to work on it though.

Anyway, this weekend, my friend Amaya started tweeting her only little vagina monologue. I found it funny, and told Steph about it. This started Steph talking about one of her big pet peeves. Namely that people use the term "vagina" to refer to the entirety of the female genitalia as opposed to referring to the labia, clitoris, etc. by their separate and unique names.

I countered that the same is done with the penis. She claimed it was different, but I maintain that while perhaps not medically accurate, if I am referring to my penis, I generally intend for that to cover the inclusion of my testicles and scrotum as well.

But she's right. It's medically incorrect. But I'm not a medical doctor. I'm a doctor of pimpology, and I believe that generalized sexual terms are necessary.

I proposed to Steph that while the medical terms might be more specific, certainly colloquial slang is more generalized. As such, I argued that the term "pussy" for instance might be more inclusive.

I actually expected her to counter that pussy was equivalent to vagina, but she surprised me arguing that pussy meant the external naughty bits. The labia and clitoris.

I argue that this can't be. In the name of scientific study, take the following colloquial exclamation that might be uttered by one experimental female subject:

"Fuck my tight pussy with your rock hard cock, you son of a bitch!"

I'd argue that the woman speaking that phrase isn't looking for a penis to be rammed into her labia, or even the clitoris, but is looking for deeper penetration along the vaginal canal. Conversely, if the subject had proclaimed:

I'd argue that she is referencing her external genitalia and not in fact asking for that same vaginal canal to be massaged orally.

Along the same token, while I believe that a male subject might generally be referencing the shaft and glans of penis, as in the following pejorative:

"Take that cock deep inside of you, you dirty whore!"

I'd argue that in some cases he might be referring to a larger portion of his anatomy for instance if he were to offer the following instruction to his mate:

"Squeeze and lick that cock all over, you gorgeous and yet intelligent and capable woman!"

One might assume he is asking for attention to also be paid to the scrotum and perhaps perineum as well.

"Ejaculate your seminal fluid into my ectocervix, you virile male gendered homosapien. My portio vaginalis hungers for your spermatozoa."

Our species would be extinct within a generation.

So what I'm wondering is how do other people use the terms. Do you expect vagina, penis, pussy, cock, dick, cunt, manroot, lady business, peepee and hoohoo to be medical specifics or more generalized areas. Does it vary from slang term to slang term?

And most importantly, was anyone actually turned on by my clinical dirty talk?
Collapse